You are here: Home1 / Bible2 / New Testament3 / John4 / The Resurrection of Lazarus

The Resurrection of Lazarus

In a town called Bethany lived a man called Lazarus and his sisters Mary and Martha, they were friends with Jesus. One day, Lazarus became very sick so his sisters sent a message to Jesus saying “Lord, the one you love is sick.”

When he heard this, Jesus said, “This sickness will not end in death. No, it is so that God can show us something about himself through it.”

Jesus loved Mary, Martha and Lazarus so he said to his special friends, the disciples “Let’s go and see Lazarus”

“But teacher” they said, “people in that area want to kill you, surely you don’t want to go back there?”

Jesus answered, “There’s 12 hours of light in a day and whoever walks in daylight won’t trip over. When people walk at night in the dark, they trip over because there is no light” Jesus was trying to tell the disciples that they would be okay because they were doing God’s work.

Then Jesus told the disciples “Our friend Lazarus has fallen asleep; but I’m going to go there and wake him up.”

Didn’t I tell you that if you believe, you will see God’s power?

So, then he told them simply, “Lazarus is dead, but let’s go to him.”

Then Thomas said to the rest of the disciples, “Let’s go with Jesus, so that if he dies then we die with him.”

When Jesus and his friends arrived in the area, they heard that Lazarus had already been put in the tomb and he had been there for 4 days!

When Martha heard that Jesus was coming, she went out to meet him.

Martha said to Jesus, “if you had been here, my brother wouldn’t have died. But I know God will give you whatever you ask.”

Jesus said to her, “Your brother will not stay dead, he will live again.”

“I know” Martha answered, “He will live again, because he loved you, at the end of time he will be brought back to life”

Jesus said to her, “I am the resurrection and the life. People who believe in me will live, even though their bodies die; and people who live by believing in me will never die. Do you believe this?”

“Yes, Lord,” Martha replied, “I believe that you are the special person we have been waiting for, you’re the Son of God, who has come into the world.”

After this, Martha went back to the house and told her sister, Mary, “The Teacher is here, and is asking for you.”

Mary went out straight away to meet Jesus, he hadn’t come into their village just yet.

The people at Mary’s house saw her leave the house very suddenly and thought she must be going to visit Lazarus in his tomb. They wanted to go and visit the tomb too so they followed Mary.

When Mary saw Jesus she was so upset that she fell down at his feet and said “Lord, if you had been here, my brother wouldn’t have died.”

When Jesus saw how upset Mary was and how hard she was crying, he felt very upset too. The people who had followed Mary were all sad and crying too.

“Where is his tomb?” Jesus asked.

“Come and see, Lord,” they replied.

Jesus began to cry too and the people said “Look! Jesus really loved Lazarus too”

But some of them were annoyed and said, “Jesus can make blind people see, why didn’t he stop his friend from dying?”

Jesus was still very upset when he got to the tomb. The tomb was a cave with a big stone across its doorway.

“But, Lord,” said Martha, “Lazarus’ body has been in there for 4 days already, by now he will stink!”

Jesus replied, “Didn’t I tell you that if you believe, you will see God’s power?”

So they took away the stone. Then Jesus looked up and said, “Father, Thank you that you heard me, I know you always hear me, I’m just saying this out loud so that everyone here will believe that you sent me”

Then Jesus called in a loud voice, “Lazarus, come out!”

Lazarus came out of the cave, he was wearing special clothes that people were put in before they went to their grave, but he was alive!

Jesus said to the people standing around, “Take off the grave clothes and let him go.” They were amazed at what God had done, and very happy that Lazarus was alive! They knew that Jesus was really someone special. 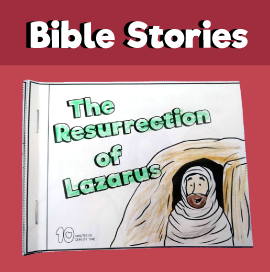 Latest Printables
The Printable Randomizer
I Have a Craft Idea!
Healing the Paralytic at Bethesda

The Tree of Knowledge
Scroll to top