You are here: Home1 / Bible2 / New Testament3 / John4 / Healing the Paralytic at Bethesda

Healing the Paralytic at Bethesda

Jesus had been travelling around teaching people and making sick people better. He went back to the big city of Jerusalem for a special holy day.

Inside the city, near the Sheep Gate, was the pool of Bethesda. It was a pool of water, like a swimming pool, in the stone with five covered walkways around the pool.

Nearby there was a temple for people of other religions who believed in other Gods. They thought that they could be made better by getting into the pool when it bubbled up, or was stirred around. So, under the walkways there were crowds of sick people waiting for their turn to get into the water and been made well.

One of the men lying there under the walkway had been sick for thirty-eight years. He could not walk.  When Jesus saw him, he knew that the man had been ill for a long time, so he asked him, “Would you like to get better?”

“I can’t get better, sir,” the sick man said, “because there is no one to help put me into the pool when the water bubbles up. I can’t walk and push my way through the crowd, so I try to crawl along but someone else always gets there before me.”

Jesus said “Stand up, pick up your mat, and walk!”

Straight away the man was better! He was healed!  So, he rolled up the mat he had been lying on and began walking! He was amazed that Jesus had healed him just by talking to him, and that he didn’t need to get into the water at all. It was a miracle, and the man believed in Jesus. 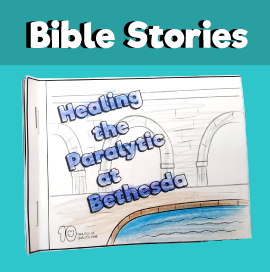 Latest Printables
The Printable Randomizer
I Have a Craft Idea!
The Story of Pentecost

The Resurrection of Lazarus
Scroll to top