The Story of Pentecost

When Jesus had died and then come back to life, he told his friends to wait for the Holy Spirit, and then he went up to heaven.

Jerusalem was very busy; people from many different countries had come to celebrate a special festival and the city was full! There was a real buzz about the place as people prepared to celebrate, all talking in different languages, wearing different clothes and eating different kinds of food.

Jesus’ special friends and others who believed in him were in Jerusalem too. They were all together in an upstairs room, praying and worshipping God, when suddenly there was a sound that came from heaven.

It sounded like a rushing, roaring wind, like a storm, and it filled the house they were in. Suddenly flames appeared and looked like they settled on each person there, but did not hurt them.

The Holy Spirit Jesus had talked about had come, and it filled everyone there. Suddenly, they could all speak in other languages that they had never learnt!

When the crowds in the street heard the loud noise, they came running to see what had happened and they were completely amazed to hear Jesus’ friends speaking in their own languages.

But other people in the crowd made fun of them saying “How ridiculous! They’ve had too much wine to drink and are being silly. This isn’t special at all!”

So Jesus’ special friend, Peter, stepped forward with the eleven other apostles and shouted to the crowd, “Listen carefully, all of you, we have not had too much wine, we are not drunk and we’re not just being silly like some of you have said we are. Nine o’clock in the morning is much too early for that kind of thing. What you are seeing today was written about in the Bible a long time ago. A special man called Joel wrote

‘In the last days,’ God says,
‘I will pour out the Holy Spirit on all people.
Your sons and daughters will give prophecies
Your young men will see visions,
and your old men will dream dreams.
In those days I will pour out my Spirit
even on my servants—men and women—
and they will give prophecies
And I will cause wonders in the heavens above
and signs on the earth below—
blood and fire and clouds of smoke.
The sun will become dark,
and the moon will turn blood red
before that great and glorious day of the Lord arrives.
But everyone who calls on the name of the Lord
will be saved.’

“Everyone, listen!” Peter said “You already know that God showed everyone that Jesus was His son by doing wonderful things through him, but then Jesus was killed.

This wasn’t an accident, God knew it would happen, in fact it was his plan all along. God needed Jesus to die on the cross so he could be raised back to life.

In the Bible King David said this, which we can now tell was about Jesus:

‘I see that the Lord is always with me.
I will not be shaken, for he is right beside me.
No wonder my heart is glad,
and my tongue shouts his praises!
My body rests in hope.
For you will not leave my soul among the dead
or allow your Holy One to rot in the grave.
You have shown me the way of life,
and you will fill me with the joy of your presence.’

“Think about this..” Peter said, “When David wrote that he couldn’t have been talking about himself because he died and was buried and did not come back to life. His grave is still here.

But David was a prophet, God told him things that would happen in the future, and David told others about them. David was talking about Jesus, and how Jesus would die but not be left to rot in the grave, and instead would come back to life.

“God raised Jesus from the dead, and we are all knew about this and now Jesus is in heaven, right next to God. Jesus promised that the Holy Spirit would come…and now it has, today!

David, has never been to heaven, but he wrote in the Bible

‘The Lord said to my Lord,
“Sit in the place of honor at my right hand
until I humble your enemies,
making them a footstool under your feet.”’

“So let everyone in Israel know for certain that God has made Jesus, who died and was raised back to life, to be someone incredibly special to show us how to be friends with God again!”

“What should we do?”

Peter replied, “Each one of you needs to say sorry to God, for the things you have done wrong and for the times you have forgotten to do the right thing. Change your ways and turn to God, and then get baptized. Then you will receive the gift of the Holy Spirit too!

Then Peter carried on talking to the crowd for a long time, telling the listeners to trust in God and save themselves.

Those who believed what Peter said were baptized and joined the church that day. About 3000 people now believed in Jesus. 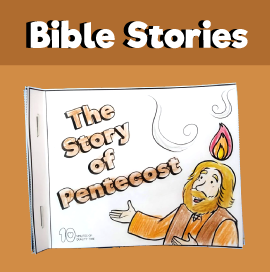 Search for a Printable

Latest Printables
The Printable Randomizer
I Have a Craft Idea!
The Raising of Jairus’ Daughter