You are here: Home1 / Bible2 / New Testament3 / Luke4 / The Parable of the Prodigal Son

The Parable of the Prodigal Son – Bible Story for Kids

Jesus told a story to explain how happy God is when we come back to Him.

Once there was a man who had quite a bit of money, and some farm land. He also had two sons. The youngest son said to his dad ‘I want my share of your money now instead of when you die.’ So, his dad agreed to split his money up: some for the eldest son, and some for the youngest.

A few days later the youngest son packed his bags and moved away. He went to a different country that he thought was much more fun, and since he had lots of money, he decided to spend it! He bought nice things, ate the yummiest food, and had lots and lots of parties. He was having a wonderful time but soon enough the money ran out.

Unfortunately, at the same time the food in the new country ran out. Food had not grown very well that year and there was nothing to eat, so the youngest son began to starve. He begged a farmer to give him work, and the farmer sent him into his fields to feed the pigs. This was the worst possible job, no one else wanted to do it but the youngest son was hungry and desperate. So desperate that the pigs’ food began to look good to him.

He was lost, but now he is found!

The youngest son thought to himself ‘at home even the servants are happy and have plenty to eat and here I am dying of hunger’ He came up with a plan to go home and say sorry to his dad. He decided to ask if he could be a servant in his dad’s house because he felt he had been too bad to be called a son.

So, he went home to his dad. His Dad saw him coming in the distance and his heart was full of love for his son. He ran to his son and hugged and kissed him. The youngest son said “Dad, I’m really sorry. I let you down, and I let God down too. I have been too bad to be your son, but please can I be your servant?”

His Dad said to the servants “Quick! Find some lovely, comfortable clothes for him, and some nice jewellery and some new shoes! Get out the best food we have and prepare a feast! It’s time to celebrate! I thought my son was dead, but he is alive! My son was lost, but now he’s found!”

The party started but the oldest son was in the fields working and when he got home, he heard the music and dancing in the house.

“What’s going on?” he asked a servant

“Well, I’m not joining in with that!” The oldest son said angrily. His Dad overheard this

“Please come in and join the party” he begged

“No” The oldest son said crossly “All these years I’ve worked and worked and done everything you’ve told me. I’ve been good and followed all the rules, and we’ve never had a party or a feast for me. Yet my brother has run off, spent all your money, and come home to beg and you are having the biggest party feast I’ve ever seen. It’s not fair!”

His Dad explained; “Look, you are so special to me and you have always been by my side. Everything I have is yours too. I love you. I love your brother too, even though he messed up and we have to celebrate because I thought your brother was dead, but he is alive! He was lost, but now he is found!”

Jesus told this story to explain that even if we mess up God is happy to welcome us back, and loves us just the same as before. 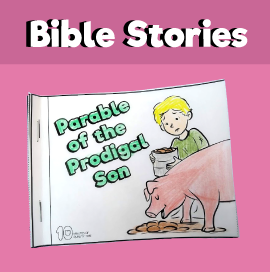 Latest Printables
The Printable Randomizer
I Have a Craft Idea!
The 12 Apostles Story for Kids

The Rich Man and Lazarus
Scroll to top