The Rich Man and Lazarus – Bible Story for Kids

There was once a very rich man who wore beautiful clothes and lived a comfortable life in a very grand house.

Outside of his house there was a man named Lazarus. Lazarus had no home of his own and was very sick; his skin was covered with sores and he had no medicine to get better. Lazarus had no food and was very hungry, his stomach growled, and when he saw that the rich man had so much wonderful food, he began to daydream about eating just some of the leftover crumbs.

When Lazarus died angels carried him to Heaven, to be with God and an important man called Abraham who had died a long time ago.

The rich man also died and was buried, but the rich man did not go to Heaven. He was separated from God and others. Being alone was awful, the place was awful. It felt sad, lonely and painful like hot fire.

Your family know the stories of God, and his rules

He looked up and saw Abraham far away with Lazarus next to him. The rich man called out to Abraham “Oh Father Abraham I am so thirsty, and in such pain. Please send Lazarus to give me a little sip of water and cool me off, I am really hurting here!”

Abraham replied “When you were alive you had many good things, but Lazarus had many bad things. You had a beautiful, great, big mansion and Lazarus had nowhere to live. You were perfectly healthy, and Lazarus was very sick. You had lots of money and lovely things; Lazarus had none. You had plenty of delicious food to eat, and Lazarus was starving. Now that you have both died, Lazarus is being comforted and you are not. Lazarus is here in heaven, but you are elsewhere and there is a huge divide between us. No one can cross from one place to the other; it is simply not possible, so I can’t send Lazarus to help you or give you a drink. You did not help Lazarus when he needed it”

The rich man begged Abraham “If you can’t send Lazarus to save me then send him to save my family! I have five brothers who are still alive please send Lazarus to warn them so that they won’t end up here like me! This place is awful!”

Abraham answered “Your family know the stories of God, and his rules, they should know how to behave”

“No, father Abraham,” the Rich man explained “if someone who has died appears to my family, they will realise that they are not behaving as they should, they will say sorry and they will change their ways.” 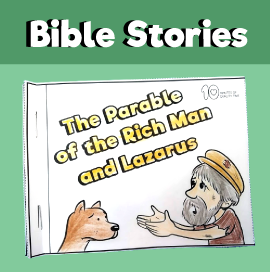 Latest Printables
The Printable Randomizer
I Have a Craft Idea!
The Parable of the Prodigal Son

The Samaritan Woman at the Well
Scroll to top