The 12 Apostles Story for Kids

When Jesus began travelling and teaching about God people began to believe what he said. Some followed him around to learn more about God.

One night, Jesus prayed all night long and then chose a group of 12 friends who were very special to him, they were called apostles

Jesus knew that the apostles would be important teachers who would teach others about him after he died. So, Jesus spent a lot of time with the apostles so they could learn as much as possible about who he was and about God.

Jesus chose very ordinary people to be his friends and apostles; One day he was walking along the sea shore and saw fishermen throwing their nets down into the water to try to catch fish. Two of them were brothers called Simon and Andrew. Jesus called to them “Come and follow me!” they put down their fishing nets and followed Jesus straight away. Jesus decided to call Simon ‘Peter’.

Further along the sea shore Jesus saw two more brothers called James and John. James and John were fishermen too and they were sitting in a boat with their dad. Jesus called to them “Come and follow me!” they put down their fishing nets and followed Jesus straight away. James and John had big, strong, fiery feelings about most things, but Jesus still chose them.

When he was in a town called Galilee, Jesus found a man from the same town as Peter and Andrew. His name was Philip and Jesus said to him, “Come, follow me.” Philip went to tell his friend Bartholomew about Jesus straight away.

Philip found Bartholomew under a fig tree “I’ve found a very important person! The one that Moses and all our other special teachers wrote about! His name is Jesus, he’s Joseph’s son, and he comes from Nazareth”

“Nazareth!?” Bartholomew said, not very impressed. “Does anything good come from Nazareth”
“Come and see for yourself,” Philip replied.

As they got close Jesus said, “Here is a very good and honest man”

“How do you know about me?” Bartholomew asked.

Jesus replied, “I could see you under the fig tree before Philip found you.”

Bartholomew called Jesus Rabbi, a special word for teacher, and knew that he was the Son of God so he followed him straight away.

Jesus laughed “Do you believe that just because I told you I had seen you under the fig tree?” and promised “I’ll show you greater things than that!”

As Jesus was travelling, he saw a man named Matthew sitting at his tax collector’s booth. Matthew collected money from people and gave it to the Romans. Most people did not like tax collectors as they often were not honest and took far too much money. But Jesus said “Follow me” and Matthew got up and followed him straight away. Matthew wasn’t always fair, but Jesus still chose him.

Thomas usually found it hard to believe in things, but he believed in Jesus and was very brave and loyal. When Jesus’ friends were worried that Jesus would be killed if he went to a town called Bethany Thomas was the first to suggest that they all go with him to keep him safe. Thomas had a lot of doubts, but Jesus still chose him.

One of Jesus’ friends was called James, the son of Alpheus. He wasn’t very remarkable, and seemed to fade into the background but Jesus still chose him.

Jesus also chose a man called Simon to be his friend. Simon was someone who loved politics and made sure everyone knew what he thought. He was sometimes a bit wild, hot-headed and over-the-top, but Jesus still chose him.

Thaddeus was one of Jesus’ friends. He asked Jesus why he only showed his friends who he really was, instead of showing everyone. Thaddeus had questions, but Jesus still chose him.

One of Jesus’ special friends turned out to be an enemy; His name was Judas Iscariot and he followed Jesus, and stayed with him for 3 years but then he let Jesus down. Judas was given money to show Jesus’ enemies who he was, and, because of Judas, Jesus was arrested.

When he realized that Jesus was going to be killed by his enemies Judas wanted to give back the money and save Jesus but it was too late. Judas made huge mistakes, but Jesus still chose him.

Jesus’ 12 apostles were not perfect, but Jesus still chose them, because Jesus saw people, not as they were, but as what they might become. That is an important lesson we can learn from Jesus’ 12 apostles – there is greatness hidden in us all, even the most ordinary. 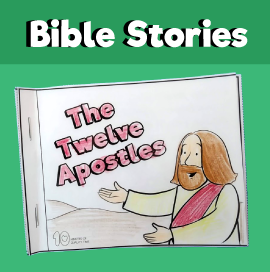 Latest Printables
The Printable Randomizer
I Have a Craft Idea!
The Birth of Jesus

The Parable of the Prodigal Son
Scroll to top