You are here: Home1 / Bible2 / New Testament3 / Luke4 / The Parable of the Good Samaritan

The Parable of the Good Samaritan – Story for Sunday School

One day an expert in religion tried to test Jesus by asking him what someone must do to be with God forever. Jesus asked the man what he thought the Bible said. The man answered, “‘You must love the Lord your God with all your heart, all your soul, all your strength, and all your mind.’ And, ‘Love your neighbor as yourself.’

“But who exactly is my neighbor?” the expert asked Jesus. He wanted to know who he had to love, was it just his family? Or his friends too? Or the people he lived close to? Or people from his country?

Jesus told a story to explain what he meant:

“A man was taking a long journey, travelling from Jerusalem all the way down to Jericho. The road was long and dangerous. It was a very busy road with all sorts of people travelling along it; there were businessmen with lots of nice things to sell, soldiers from different armies moving and marching, people on special trips and robbers!

As this man walked along the rough, rocky, desert road he was attacked by some of these robbers who stole absolutely everything from him; all of his money, all of his belongings, even all of his clothes.

The robbers were very cruel; they hit and kicked and hurt the man and then left him alone on the road. The man was hurt very badly and bleeding, he could not walk anymore and he needed some help. The road was in the desert and very, very hot in the sun and without help the man would die.

Luckily, as the man was laying there in the middle of the road hurt, bleeding, with no water or clothes, a priest came along. A priest was someone who worked in the temple, everyone thought priests were good and kind. Surely the priest would help the man?

But when he saw the man the priest did not help. In fact, he crossed the road so that he did not even get near to the man and he hurried along the road pretending that he didn’t see anything!

Next, a man who was a Levite came along the road and saw the poor man lying on the ground. A Levite was an important helper in the temple and everyone thought that Levites were good and kind. Surely the Levite would help the man?

But when he saw the man the Levite did not help. In fact, he crossed the road so that he did not even get near to the man and he hurried along the road pretending that he didn’t see anything!

Unfortunately, the next person to come along the road was a man who was from Samaria, so he was called a ‘Samaritan’

He was from a different country to the man who was hurt and lying on the ground; their countries did not get along at all, in fact, they hated each other.

Everyone thought that Samaritans were mean and hateful, surely the Samaritan would hurt the man?

But when he saw the man the Samaritan did not hurt him. He felt very sorry for him and stopped to help. The Samaritan cleaned the man up, put bandages on him and let him ride on his donkey. He took him to an inn, a bit like a hotel, where he could look after him for the night to help him get better. In the morning, the Samaritan paid the innkeeper to look after the man until he was completely better.

Jesus asked his listener “Which of these men, the priest, the Levite, or the Samaritan was a neighbor to the man who was hurt?”

The man said, “The one who showed him mercy.”

Then Jesus said, “Yes, now go and do the same.” He had taught the expert that everyone is our neighbor and we should love everyone. 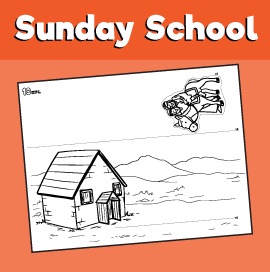 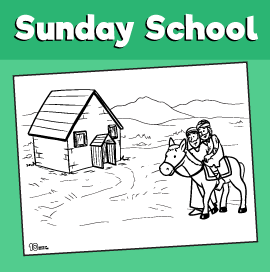 Latest Printables
The Printable Randomizer
I Have a Craft Idea!
The Story of Creation

The Birth of Jesus
Scroll to top