You are here: Home1 / Bible2 / New Testament3 / John4 / The Cleansing of the Temple Story

The Cleansing of the Temple Story

The Temple in Jerusalem was a beautiful, special building made for people to come to and worship God. Some people called it “The House of God” or “The House of prayer” because it was a special place for talking to God by praying.

Some people had noticed that they could make money by selling animals outside of the temple, and by changing money from one type to another. These people were running businesses, taking lots of money for themselves, and not helping others.

Jesus came to the temple and saw all of these people outside. Shouting to the crowds, asking for more and more money, and Jesus was furious! He hated seeing the way that people were using the temple to make money for themselves, instead of for talking to and praising God.

Jesus grabbed some rope and made a whip and began to drive the animals out of the place. He tipped over the moneychanger’s tables so that all their coins went flying, and got mixed up. He told them “Get these things out of here. Stop turning my Father’s house into a marketplace!”

He said to them, “God said ‘My Temple will be called a house of prayer for everyone,’ but you have turned it into a den of thieves” He called them ‘thieves’ because they were tricking people into spending far too much money, just to make themselves rich. After the animals, the money and the people had gone, Jesus went into the Temple.

The children had been told that a special person was coming to earth, who would help people to be friends with God again, and that he would be called the Son of David. When they saw Jesus making people better, they knew it was him, so they said thank you to God for sending him.

“Thank you, God, for the Son of David” they were saying.

But the teachers and temple workers were annoyed, they didn’t think Jesus was this special person. So, they asked Jesus, “Do you hear what these children are saying?”

When the teachers and temple workers all heard what Jesus had done, they were extremely angry and began planning how to kill him. But they were also afraid of him because the people were so amazed at his teaching. That evening Jesus and his friends left the city. 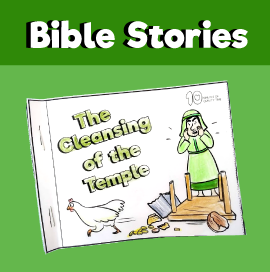 Latest Printables
The Printable Randomizer
I Have a Craft Idea!
The Samaritan Woman at the Well

The Raising of Jairus’ Daughter
Scroll to top